You need to see this: Syrian Refugees’ Most Important Things- http://www.bbc.co.uk/news/magazine-21939840 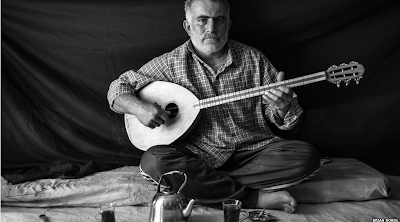 You really need to see it. It’s just ten images of Syrian refugees with their most important thing.
For those of you who dismissed the link the first time here is it again: http://www.bbc.co.uk/news/magazine-21939840
It reminded me that behind the headlines of body counts and outside of the politics of interference from the west are Real People.
Actual real people - mind, body and soul.
Real people who have had their lives violently interrupted and ripped apart.
Real mothers and fathers who worry about the futures of their children.
Real school children whose education has been stopped.
Real business owners who have left behind their livelihoods.
Real children who fight and argue with their siblings.
Real people who get ill and tired and scared.
Real people who had roots in the family, friends, neighbours and community they love o so dearly but had to leave behind.
Real people with hopes for the future clouded by the worries of today.
Real people who hope that change is coming.
Real people.
Not just ‘Syrians,’ a group of people ‘other’ than us. Real people.
Change a few circumstances and it could have been us, forced to leave behind everything we know for life in a refugee camp.
There are thousands of these real people. Thousands of men, women and children. Thousands of mothers, wives, grandmothers, aunts, sisters, cousins and daughters. Thousands of fathers, husbands, grandfathers, uncles, brothers, cousins and sons.
When confronted with something so big and with such a high human cost I often get overwhelmed by not knowing the best way to respond. I have learned to do two things:
1. Pray. Even though it often doesn't seem like much prayer takes the problem to the throne of God - there is nothing more powerful.
2. Support the people paying the cost - usually through an organisation that know what they're doing.
3. If the global scale seems outta reach then find out if you can do something on a local scale.
Reach out your hand. The least we can do is try and support these real people: /http://www.tearfund.org/en/news/press_releases/dec_launches_syria_crisis_appeal/
Pray. Petition. Seek Peace.

Like Loading...
So last Saturday I spent a few hours hanging around one of the entrances to the Millwall football ground trying to persuade everyone who went by to donate some money to the Trussell Trust. Yeah, at Millwall – the team with the reputation for having the nicest fans in the country.
Why was I there? Good Question (those mind reading psych lectures have really paid off) and one I asked myself several times over the course of the day. This crazy/amazing lady called Alex was doing a 24 hour run in order to raise money for the Trussell Trust foodbank network.
Yes, 24 hours of non-stop running.
I don’t understand how it works either. I can barely stay awake for 24 hours let alone run at the same time. Like I said, crazy/amazing. She started on the track at the Crystal Palace Sports Centre on Friday afternoon and then kept running till she lapped the pitch during half-time of the Millwall game. You can still donate: http://www.justgiving.com/AlexFoodbank24hour.
So there I was, bucket in hand, fake smiling so much I felt like Barbie and getting sick of hearing myself say “We’re collecting for the foodbank network” when I was reminded of the vast spectrum of generosity (I usually get this epiphany during supermarket collections).
At one end you have those who ignore you as they walk past muttering something about 'charity muggers' (Hello! I am right next to you! I'm not deaf so say it to my face!), and at the other end you have those who donate notes rather than coins without you even having to ask. In-between you get those who give you two coppers from their fist full of change and those who dig around in their pockets for five minutes and give a few pounds. And then there’s those who ask where the money goes and give their stamp of approval that it’s to help people in the UK. I’m not wanting to judge people’s generosity (I have been several of these people), what they do with their money is between them and God, but I was just reminded of how different we are.
My favourite moment of the day was when a kid, around 6 years old, pulled on his Dad’s sleeve asking for money to give. I doubt he had any idea what I was collecting for, but something in him wanted to give money away. Maybe because he doesn't have any money of his own, giving away his Dad's money is an easy thing to do (hmmm, I think there's a lesson here). It was totally worth standing in the freezing cold and being called "flower" and "love" by scary Millwall fans more times than I can count  just to see that kid make his Dad stop and search for some money. O the things you can learn from children...

Like Loading...
I LOVE this.
A bunch of Super Rich people in France turning to their PM and saying, “Look mate, we know we’re in a bit of a fix with this debt thing and all. How about you tell us to give you more money and we’ll do it. We’re loaded; we’ll still have plenty left so we don’t mind. Tax us up baby!” Or words to that effect. And you know what’s happened? France has announced a special tax on the Super Rich.
Now, my inner cynic says that these Super Rich knew about the impending tax and so decided to make the most of a tax-increase with a bit of positive publicity by appearing to offer their millions ‘for the sake of the nation.’ But at the same time, I believe in human kindness and generosity. And so maybe they did this out of the kindness of their hearts.
Maybe.
Either way we can learn a lot from this in Britain. Which is why I'm considering sending this letter to the richest people in the country:
Hello Super Rich people in Britain,
We need you to do us a favour. For the sake of the nation. For the sake of the thousands of people that have supported you in your bids for market domination.
You know this thing called national debt? You know how the government are cutting services left right and centre to make up for our lack of funds? You know how thousands of people are feeling the negative effects of this? Well how about you help us out? I’m thinking in a similar fashion to our French cousins - offer to pay higher taxes.
It’s simple enough. You have millions to spare. The government does not. Well. Actually. Let’s face it, most of the government have a few mill to spare (but don’t get me started on that). The nation itself does not.
So how about a bit of generosity. How about you give back to the nation and people that helped you get where you are today. I’m sure if you rang Dave&Nick up they’d be delighted to accept your most generous offer. And of course, you will be remembered for all time as the people who helped get Britain back on her feet.
Yours sincerely,
one of the non-super rich people of Britain
And for those of us who aren’t super rich, get yourself supporting the Robin Hood Tax.