Omygosh! You will never guess what happened to me today! There was no running water in the flat. Like, the water actually stopped running! The tap was totally on, but there was no water! Nothing. Nada. Zip. No water.

Did you get that yet? There was no water!

So I couldn't get a drink, even though I was parched.

I couldn't cook my dinner, even though I was hungry.

I couldn't water the herbs in the kitchen, even though they were drier than the plain chicken at Nandos (seriously, why is that even an option?).

I couldn't wash the dirty plates and cutlery, even though flies were hovering menacingly around them.

I couldn't wash my hands, even though they were covered in Public Transport Filth - I dread to think of what I might have caught if it weren't for my trusty hand sanitizer.

I'm pretty sure that the washing machine wouldn't have worked either - so no clean clothes y'all.


The tap was totally on, but there was no water. For like, at least half an hour. A full 30 minutes. And then, thank God, it suddenly came back.

Thank God I didn't have to make the 30 second trip to the corner shop to buy some bottled water (I mean, I don't think they even stock Isklar Water - my favourite Carbon Neutral Norweigan glacial natural mineral water with exceptionally low mineral content. I might have been reduced to buying Evian or something equally mediocre - just the very thought of it will give me nightmares for a week).

Thank God I then didn't have to carry the mediocre bottled water up two flights of stairs.

Thank God that even if I had bought some water it would have been clean and wouldn't have made me ill.

Thank God the water came back on.

Thank God the water came back on and I was able to drink clean water from the tap, cook my dinner, wash up and wash my hands.

The truth is that not everyone has access to safe drinking water - and by everyone I mean 768 million everyones.  This is roughly one in ten of the world's population.
(WHO/UNICEF Joint Monitoring Programme (JMP) Report 2013 update)*


The truth is that unclean drinking water increases your chances of developing water related diseases such as diarrhoea, trachoma and typhoid. Some of these diseases can be fatal, especially in children who are less than 5 years old.

The truth is that women in Africa and Asia often carry 20kg of water on their heads, that's the same weight as the average UK airport luggage allowance (UNDP: Human Development Report, 2006: page 34-35)*. I can usually barely lift my holiday suitcase onto the conveyor at the airport, let alone carry it on my head. Every day. And then walk a few miles.

The truth is that sickness and having to fetch water everyday is a huge barrier to working and education.

But there is Hope - there are some great organisations such as Water Aid and Tearfund who work with communities to make safe and clean drinking water accessible. See how you can support them.

What else can you do?

Like Loading...
In the three weeks that I have been working in a school I have had some interesting conversations with the kids about faith and religion. They have some pretty deep conversations – for example “did humans evolve or were they made from mud?”, “how could Mary also be God?” You know, just your standard topics for seven year olds.
But the other day I was asked one of the most serious questions of all and I had no idea what to say.
“Rachel, is the Tooth Fairy real?”
Five innocent faces turned to me awaiting confirmation of their argument that the Tooth Fairy is either real or their parents are liars.
Such an innocent question that sparked a major Moral Dilemma and blind panic.
What was I supposed to say?
I had to either confirm a lie or destroy a belief in a kindly fairy that takes away your teeth that have fallen out and replaces it with money.
I had the opportunity to stand up for the Tooth Truth and defeat some of the lies adults needlessly tell children. The downside being it would probably make some kids cry and their parents very angry (although in the long run not having to give their kid money for every tooth would save them atleast £20).
Was this child asking me because they thought that as an adult I would tell them the truth? Or were they just asking me because I happened to be there at the time?
Cue the major soul searching. Did I want to lie? Did I want to crush their dreams?
In the end I totally wimped out and said “Well, the tooth fairy always visited me when I was young”. I mean, I had just sat there in their science lesson and not said anything about how the evolution of dinosaurs from lizards was more of an opinion rather than a fact, even though it’s taught as one.
I had better start prepping my answer to the Father Christmas question. 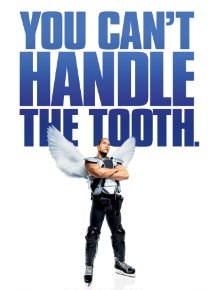