Three days later and I almost don't believe it happened - and I was there! If I didn’t have photographic evidence I’d be pretty sure it was a hallucination brought on by my latest sugar detox (yep, back off evil refined sugar and SUFFERING). I'm talking about this: 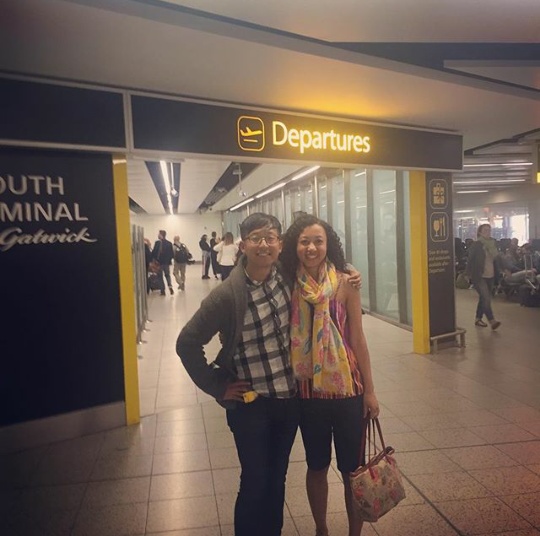 This is Minsoo. He is one of my favourites. He lives in Seattle and before Sunday the last time I'd seen him was seven years ago in New Zealand. He is part of my YWAM fam and was fortunate enough to be on the same team as me for the three months we spent in South Africa. He is one of the last people I thought I would see on Sunday - if you asked me to name 100 people who I thought I might have seen I would have ranked Beyonce, David Cameron and Darth Vader as more likely.

So there I was, walking home from church thinking about what to have for lunch and feeling a little glum because sometimes the weight of the world’s hurts are just too real. I’ve been trying to be less available (long story) and so my phone isn’t always with me/don't often check it. But thank God (literally) I did it because otherwise I would have missed out on The Most Random and Unexpected Sunday Afternoon of My Life. In amongst the messages checking I hadn’t been caught up in the London Bridge attack (thank you concerned friends, your love is not unnoticed or unappreciated) was this: 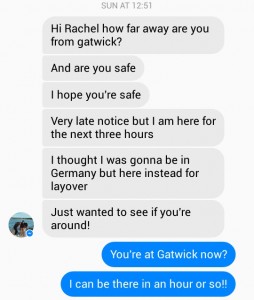 I literally stopped walking and stood there for a good couple of minutes, with my mouth hanging open catching flies, rereading the message to check I understood. And once I realised that in fact a good friend who I hadn’t seen for seven years was only a 25ish minute train journey away I pretty much ran the whole way to the train station. And within the hour I was running/walking quickly in a way that doesn’t attract undue security attention across the North Terminal at Gatwick toward one of my favourites! Thank you Jesus for great train connections, and for my stealth skillz that meant I didn't get tackled by security.

I still can’t quite believe it happened. We got to spend the next hour or so catching up on seven years of life. Apparently I am more outspoken than I was seven years ago - ha!

I had no mental preparation for this. Which is maybe why, a few days later, I am still wondering how it even happened - admittedly I haven't been very productive this week.

Have you ever been there? Ever had something so incredibly unexpected, unpredictable and uncontrollable happen that you just stop and wonder how you ever came to be there and how it ever happened?

On Saturday I’d been reading a book which talked about Pentecost and the people being amazed and perplexed when the Spirit came and people were able to speak in a multitude of languages without having ever learned them before (Acts 2). Amazed and perplexed has summed up the past few days. 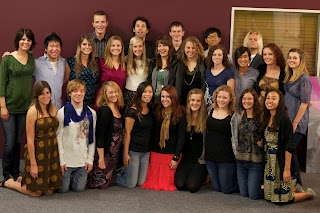 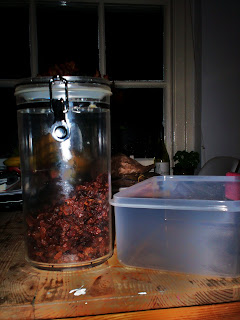 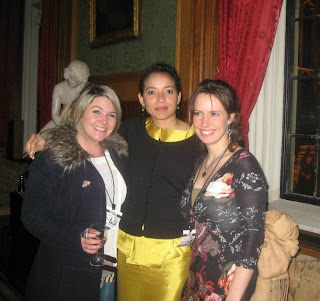